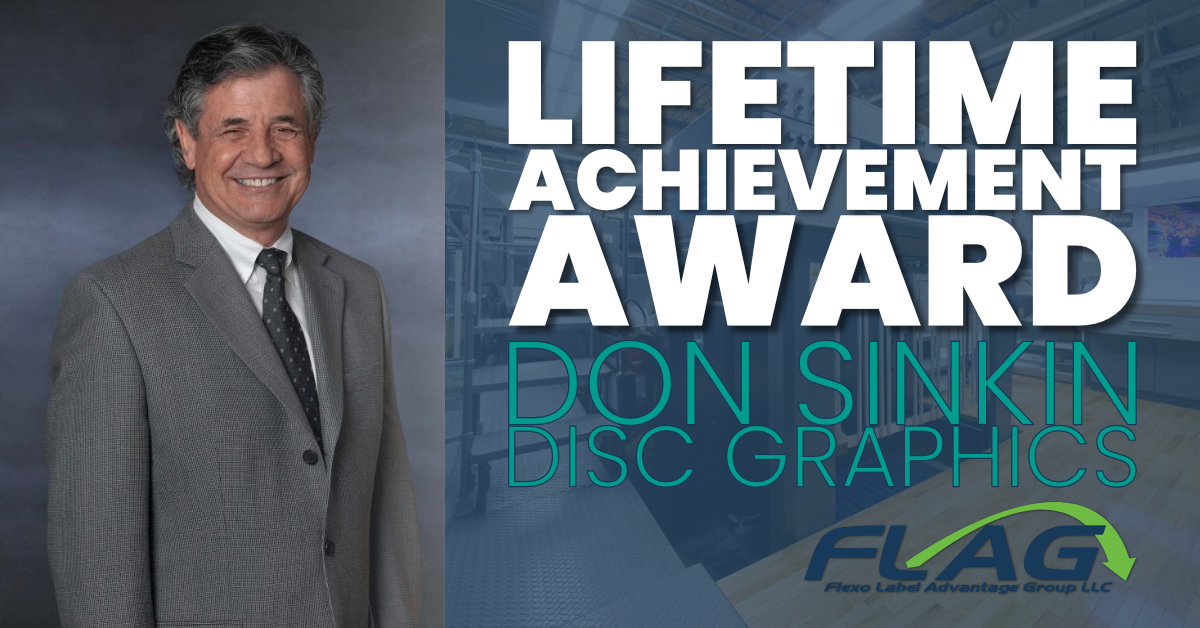 Posted By JC from FLAG

At this year’s FLAG Virtual Summit, Don Sinkin, Former Chairman and CEO of DISC Graphics, will be presented with the FLAG Lifetime Achievement Award.  The award will be presented during a virtual Awards Ceremony taking place on October 29, 2020 at 5:30 p.m. EST.

John McKay, President and Founder of FLAG states, “I am very pleased to present the 2020 FLAG Lifetime Achievement Award to Don Sinkin. This prestigious award is presented to individuals who have had a profound effect on me personally, on the FLAG organization as a whole and who have experienced significant success in their business life. The Lifetime Achievement Award was created to recognize mentors and leaders of our industry — essentially people who do it right and care about the success of others.”

McKay continues, “Don was our third Member and the first person who stepped up and offered to be a Tour Host at the inaugural FLAG Annual Members Meeting in 2011. Twenty companies toured Disc Graphics at that first meeting and Don set the stage for all future tour hosts, which has been a FLAG Annual Members Meeting highlight since.  Don’s leadership and ability to inspire his team to reach incredible goals together is proven by the company’s growth and has led to DISC Graphics receiving the Printing Industries of America “Best Workplaces in America: Award at least 16 times.”

But when you ask 72-year-old Don Sinkin about the award, he humbly responds, “I’m incredibly honored to receive this award and most honored to know there are people that think I deserve it. I really haven’t done things that others haven’t done equally well.”

Yet Don Sinkin is a perfect example of an individual who learned, grew and developed together with the printing industry across a span of forty years. He started university at Queen’s College in New York but Uncle Sam had a different plan for him and he was drafted in 1968 and spent the next two years in Okinawa in the military police.  Just out of the army he tried to find a place in this new country that to him seemed to have transitioned so much while he was gone,  Don, like so many FLAG Members, followed in his father’s footsteps and got involved with printing.  And then never left the industry!

His first job was with a good sized packaging company, Queens Litho, where he learned everything from a-to-z about the pre-press function – from stripping to plate making to color separation. 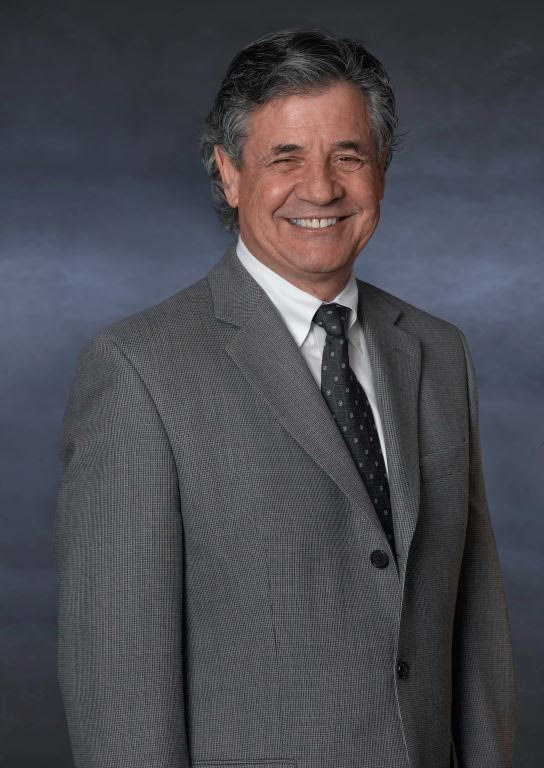 Soon after, the company opened a new division in Indianapolis and asked him to help start up the “greenfield” packaging company.  He moved west, met his wife several years later, and lived in Indiana for the next four years.

Wanting to move back to Long Island, Don took a role with a commercial print shop as night shift plant manager.  Although it looked like a great way to make the leap into senior management, he ultimately stayed only three months – learning a tough lesson along the way about the kind of company where he would … and wouldn’t … best succeed.

Next came a short stint at a pre-press house until a friend who was working at Pickwick, a division of American Can, asked him to come over and help straighten out their pre-press department. The year was 1976 and what was expected to be a six-month assignment lasted for the remainder of his career!

From then until just two years ago, the company morphed into many things.  In 1983, Don, who was at that time plant manager, became a minority owner of the newly named DISC Graphics.  Three years later, the majority owner passed away and Don took over as president. 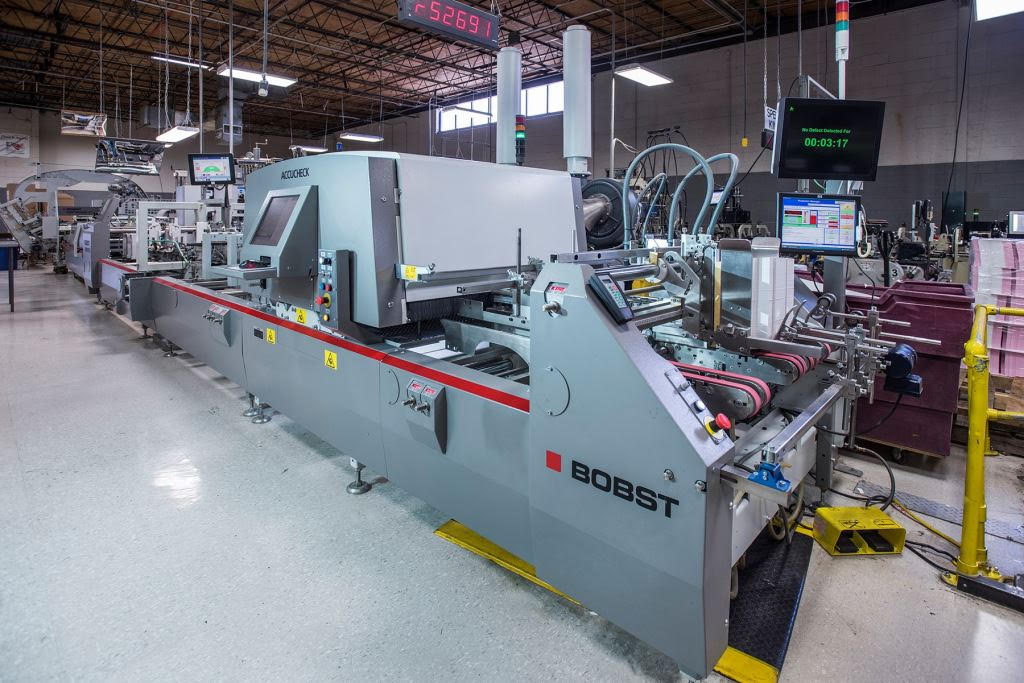 When asked about the challenges of running a company without the experience or a business degree, Don notes with a wry smile, “I just wasn’t smart enough to realize I couldn’t do it!  Maybe I would have walked away if I gave it more thought.  I did have to work hard – I understood the operational aspects of the company, knew a little bit about sales, and absolutely nothing about the financial part of the business. Fortunately, the business was only about 20 people at that time, and not terribly complicated, so with some accounting courses I could bluff my way through it.  As the company became more successful and grew – my knowledge grew with it.”

In 1995, Don and his three senior managers took the company public.  For the next seven years, DISC made five acquisitions, started divisions across the country and grew to twice the size. However, this was during the heated up days of dot coms and companies were trading at 100x future earnings.  Don viewed a public company as needing to  “operate merely for quarterly results – not in order to be a successful long-term operation.”

So in 2002, DISC went private once again and scaled down to their current manageable size of 200 employees with one facility on Long Island.  2019 also marked Don’s final chapter when DISC was acquired by Oliver Printing and Packaging, with funding provided by the private equity firm, Pfingsten Partners. Oliver is a collection of nationally renowned companies with nearly three centuries of combined experience that provide packaging and print solutions to leading brands in the health & beauty, pharmaceutical, food, and consumer package goods markets.

Since the acquisition, Don has stayed on as a part-time consultant with a remarkable amount of knowledge about the company and the industry. 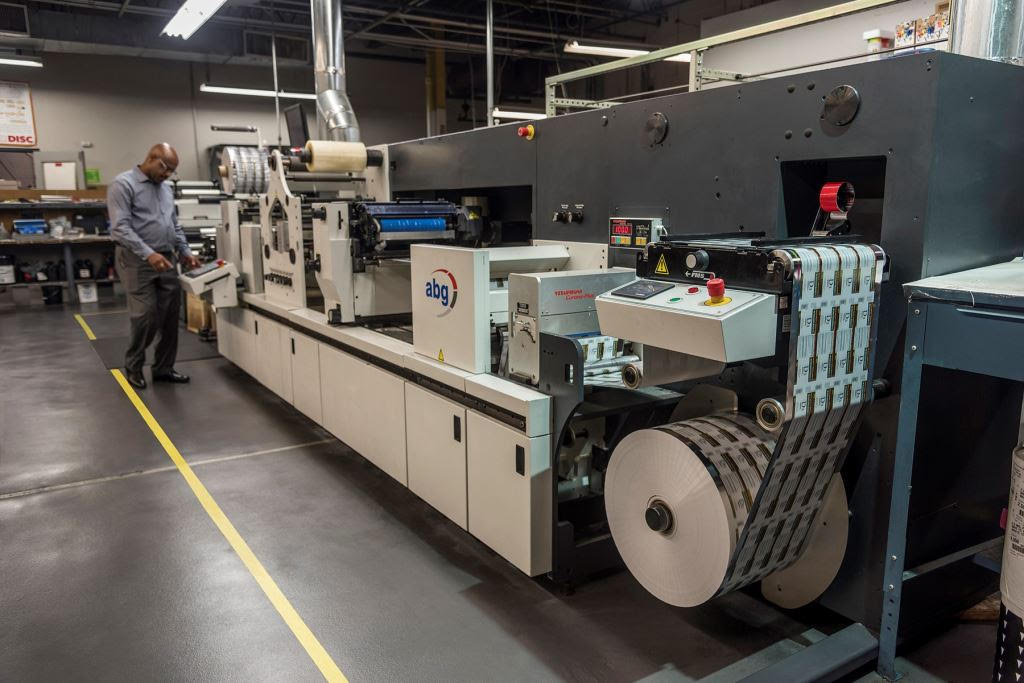 When asked about his long tenure in the labels and packaging industry, Don notes that he has always “… enjoyed working with his head and his hands.  Printing, at least the way it used to exist – gave me an opportunity to be both. It was an opportunity to have a hands on career, even when sitting behind the desk.”

His greatest personal lessons came from his time in the army when he learned that you should focus on “what you can fix – and not waste time on those things that you can’t.”  This mental discipline has stayed with him throughout his successful career.

And his advice to young people starting out their careers?  “Show up for work every day – physically and mentally. Do the best you can and look for opportunities. A lot of people don’t see them – so be a risk-taker.”  He remembers that, “There were several times when I first took over the company that I had to empty our bank account just to make payroll. But when you don’t have a lot to lose, it doesn’t really bother you. There were good years and bad years – and I was fortunate to surround myself with great people – including the three senior managers who took the long ride with me.”

Don acknowledges that the printing business is considerably different from his early days.  “I’ve  been in the business long enough to see it go from an art to a science.  Originally we cut masks and silhouettes  – there was lots of artistic work.  Today it’s mostly a science. The end product is way superior to what we were doing 30 years ago with substantially fewer people putting out a far greater output.  The machinery and technological skills have become much more important.”

Don sees manpower as one of the greatest challenges facing today’s printers.  He says, “It’s  very difficult to recruit people – anywhere in the country but especially in cosmopolitan areas.  Unfortunately it’s probably going to get worse and worse.”  At DISC, Don worked at training young people to make up the gap.  In his opinion, any young person looking for an “enjoyable and stable job where they can make a decent living should look to printing.”   He adds that college is a great place to be “mentally productive … but instead of spending $200k for a four-year school you could earn that much in the first four years of a trade.”

Today Don enjoys being partially retired and spending his free time with his wife, kids and grandkids and still working with his hands – everything from electricity, plumbing to carpentry. A game or two of golf each week rounds out the summer.  And he hasn’t ruled out finishing his college courses – because it was something “I should have accomplished but never seemed to have the time for it.” 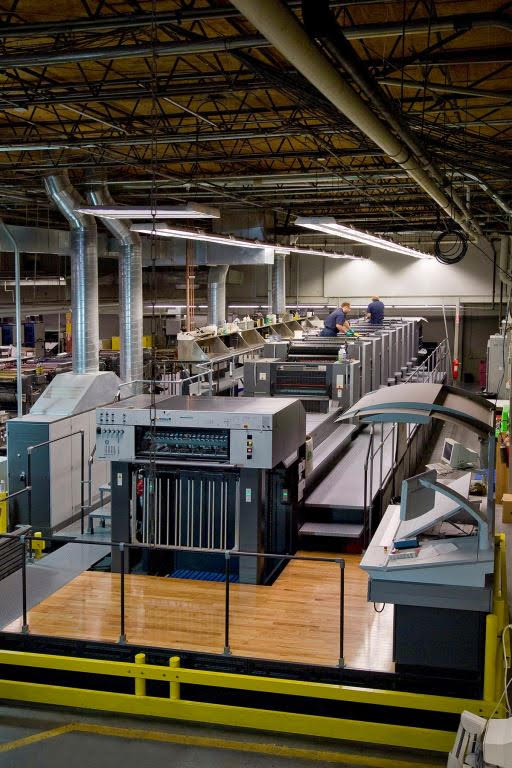 DISC was one of the original FLAG Members and Don notes appreciatively that “John McKay is a stellar individual – a decent, good, hard working person.  When he started FLAG – I immediately said count me in.  Anything John was involved in, I wanted to be a part of.”

In accepting the award, Don acknowledges the “support I’ve always had from my beautiful wife, Beverly, and my children, Jimmy, David and Andrea, has been critical over the years.  Without their understanding I never would have been able to give the time and effort my job required. Next I want to reinforce how lucky I have been to have great people around me at every step of my career. Starting with my 3 senior coworkers Margaret Krumholz, former DISC President, Steve Frey, senior VP of Sales and John Rebecchi, former senior VP of Marketing who were all with me between 25 and 40 years.  And of course, credit goes to all the incredible employees that have worked side by side with me from the beginning. I might have been the CEO but without the great team I had I probably would have been the CEO of very little. I’ve been very blessed being surrounded by great people. From my equipment suppliers to our bankers, attorneys, investors, customers and employees. All of these people and more should have their names on this award with me.”

John McKay concludes, “When DISC Graphics joined FLAG in 2010, we had no programs, no Vendor Partners, just a vision of what could happen. The day Don found out I was going to try and start FLAG, he handed me his business card and said ‘I’m in, call me when you get it going.’  That was just the encouragement I needed to draw on with this new start up.  And the rest as they say, is history.”

“Show up for work every day – physically and mentally. Do the best you can and look for opportunities. A lot of people don’t see them – so be a risk-taker.”

For more information on the 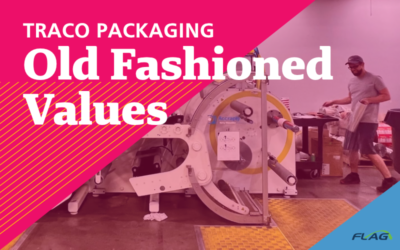 Traco Packaging has a rich history stemmed in old fashioned values and work-ethic. Nestled beneath the Wasatch... 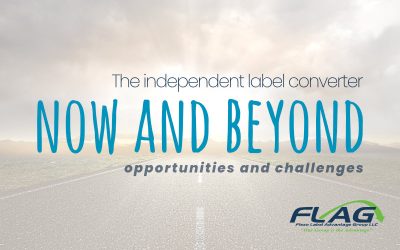 The independent label converter now and beyond: opportunities and challenges.

The independent label converter now and beyond: opportunities and challenges.  "If you don't know where you are going,... 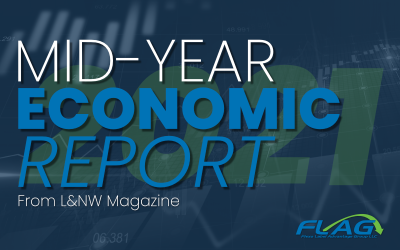 Label & Narrow Web Mid-Year Economic Report 2021 I recently had the opportunity to provide input for Label &...

You'll receive an email shortly with each webinar.

Good to go! You'll receive an email in the next few minutes.

Where should we send the estimated savings survey?

After we have a little bit of info, we'll start crunching numbers and get your savings estimate to you asap!

We'll send over the savings survey to your email right away!